This needs to be read not from left to right…but from right to left:… “Larry, Moe & Curly” were in church on Sunday and had a fantastic time.

FaithView, For Storm Riders:
“This is how God showed his love among us: He sent his one and only son into the world that we might live through him.”—1 John 4:9

God showed his love among us…Awesome.
He sent his one and only son…Terrific.
That we might live through him…Ka-boom!

I understand that the blood of Jesus brings life, but it is the living in the every day, “through him,” that reaches out and grabs in this Scripture. “Through him” means we are filtered through him, we run our dreams, plans, visions, goals through him…This means our life is found in him.

Folks, this is holiness!

And don’t sell the term “victory” short…You/we need victory. So much in this world is about tearing us down…The spiritual battle that we face is about destroying our value and worth as people…But it is in Christ—daily—we are revived and experience victory.

We’d like to welcome Larry to the church board…we are expecting super things from him. 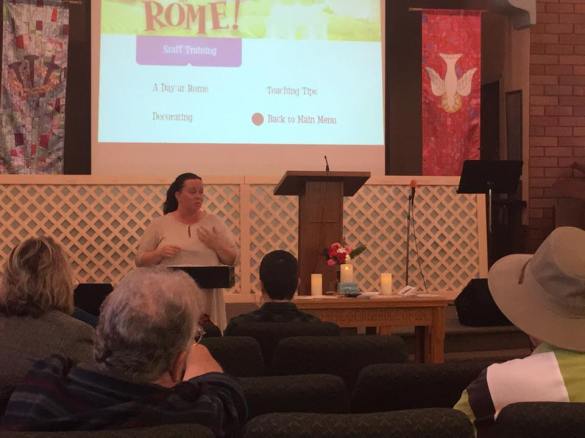 A VBS Unlike Any Other:
Our VBS director Seana Zilbert ran her first “official” teachers/workers meeting this past Sunday. We say “official” because Sean’s has been putting together VBS for 2017 since last August.

Eric Canto has posted a digital recording of Sunday’s service on the church’s Facebook page.
The music is great…the speaker…might be a little hard on the eyes.

Note:
VBS Goes to Rome: The theme for Vacation Bible School this year is “Rome: Paul & The Underground Church”
The dates are June 26-30…Look at your calendar…share with your friends…Pray for Seana Zilbert, who is directing…Make plans to volunteer.

…In 1747, on a slave ship bound for England, during a violent storm at sea, English sea captain John Newton, 22, was dramatically converted to a living faith. It was more than a “foxhole religion,” as Newton soon abandoned the sea, and from 1764 until his death (43 years later), he devoted his life as a clergyman in the Anglican Church. Newton is best known for the hymn he wrote, “Amazing Grace.”

…In 1843, Baptist preacher, William Miller of Massachusetts predicted the world would end with Christ’s return on March 21, 1843 (to be fair he said anytime between March 21, 1843, and March 21, 1844). This is where much of the church’s (universal church) “Rapture Theology” originated. By all accounts, Miller was devout and steadfast…but in the end he was proved to be a fraud. Because by the setting of dates he errored grievously as a minister of the Gospel of Christ. It can only be assumed that pride and vanity cost him perhaps the greatest asset a believer has: humbleness.

…In 1900, in Chicago, following the death of its founder Dwight L. Moody, the Bible Institute for Home and Foreign Missions changed its name to Moody Bible Institute. The school has since become the model after which other learning institutions have patterned their curriculum.
***