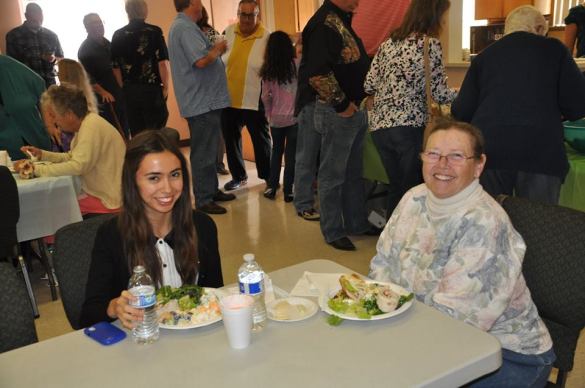 No truth to the rumor that Burbank’s electrical grid is powered by Emmy (left) and Kathy’s (right) smiles…But we can understand why people would think that.

FaithView, For Storm Riders:
“May the Lord direct your hearts into God’s love and Christ’s perseverance.”—2 Thessalonians 3:5

The question that comes to mind here is, how does the Lord direct? Better still, how do we allow the Lord to direct us?

And where exactly are we being directed?

We are to be directed to Christ, but we have this free will to choose and do anything we want…So how does the Lord direct us?

I’m going to say a dirty word here so get ready. Get the kids out of the room. Prepare yourself…How—for the third time—does the Lord direct us?

We are directed by and through our submission to him. The dirty word here, by 21st century standards, is submission. It’s hard, but we are never going to know God’s love and Christ’s victory until we learn to submit.

Who am I writing to here? Who is Paul specifically writing to in 2nd Thessalonians?

And it is appropriate that he should write to believers because often we—as believers—have the hardest time submitting to his authority. We keep the form of godliness on us…We keep to the terminology that sounds godly, but invariably we take a little chunk of Scripture and call it our “life verse” or “mission statement” and we run with it. We run with it because we are so holy…But if our vision is not God’s vision we are going to fail in the long run.

Our vision might very nice, very caring, socially motivated and rah-rah’d by the culture, but if we haven’t submitted to God and the Holy Spirit how can we be truly directed? I’ve come to recognize that even when I thought I was motivated by my best intentions that I was really being directed by my love…My goodness…My aspirations…My desire to achieve as opposed to what God’s will is…All dirty rags when compared to his pleasing and perfect will

James 4:13-17 pairs really well with the Scripture above…It talks about boasting and bragging about what we are going to do and accomplish…But our life is just a mist, and since it is just a mist—a snap of a finger in history’s timeline—then maybe we ought to let the Lord direct and lead…And he can only do that when we surrender/submit to him and his authority.
Boom! 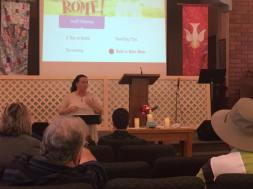 Seana Zilbert getting the ball rolling for VBS 2017.

A VBS Unlike Any Other:
Our VBS director Seana Zilbert ran her first “official” teachers/workers meeting this past Sunday. We say “official” because Sean’s has been putting together VBS for 2017 since last August. 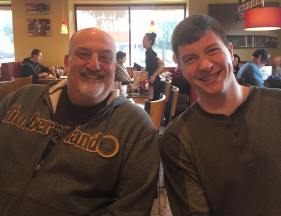 Getting The St. Baldrick’s Buzz:
Pastor Joe T., Pastor Bill and Matt Fruchey have committed to getting their heads shaved to support the St. Baldrick’s campaign to raise funds to stop childhood cancer.

Eric Canto is the “Spielberg” of Burbank Faith.

Eric Canto has posted a digital recording of Sunday’s service on the church’s Facebook page.
The music is great…the speaker…might be a little hard on the eyes.

Note:
BIG WEDNESDAY—March 15…We are planning on having an All-Church dinner/Bible Study in Martin Hall…If you were around in the old days we used to call these “Dime-A-Dips” and we talked about missions…Dinner will start at 6:30 and then Larry Marak will share a Bible Study…We will have childcare available—Megan Torosian & Emmy Chavez have already volunteered…As of right now we are not intending for this to be a potluck…we will be asking people to sign up…if we reach a certain threshold we may rethink that…We will not being doing pizza…This will not be a weekly thing…but perhaps a couple of times a year…

…In 1802, in Washington, D.C., the first Baptist church was organized with six charter members. Their first pastor Obadiah Brown was hired five years later, and Brown remained in that pulpit for the next 43 years.

…In 1849, Luther Burbank, the famous botanist, is born in Massachusetts…But it is Dr. David Burbank that plays a key role in founding Burbank in 1867.

…In 1867, Peter Cameron Scott is born. He is the founder of the Africa Inland Mission. In 1895, Scott led the first band of missionaries to reach Kenya. He died in Africa the following year, at 29, of blackwater fever. Over 700 AIM missionaries have since followed in Scott’s footsteps. 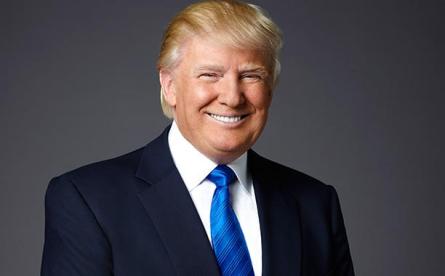