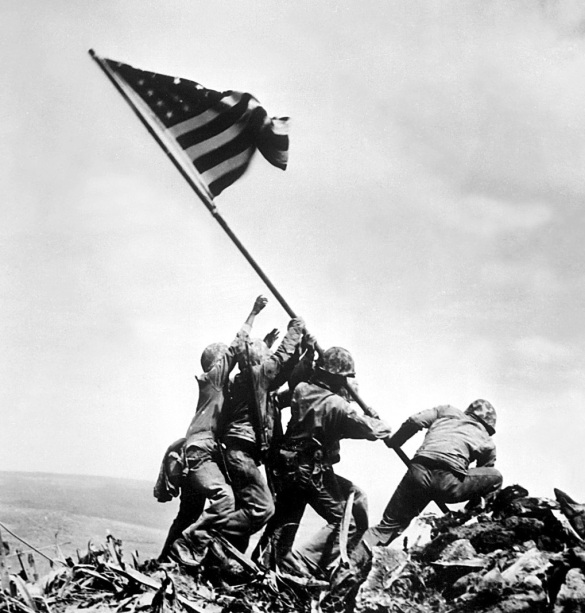 On this day in 1945…this flag was raised own Mt. Suribachi.

Scripture For The Day:
“So when you give to the needy, do not announce it with trumpets, as the hypocrites do in the synagogues and on the streets, to be honored by men. I tell you the truth they have received their reward in full.”—Matthew 6:2

One of the lessons my mom taught was never to be a counter. And what she meant by that was don’t keep track of what other people are doing. For example, I had a younger family member that could tell you whenever we were eating pizza how many slices each person had. “Joe had two, Tim one, Carson two, Dad three…”

A good chunk of what we do in church work is counting…Some of it is very important—because we do have our “fiduciary” responsibilities—much more of it is chest thumping. But then again we live in an age when even the most sanctimonious among us thump their chests at the number of good deeds they’ve done.

The other day I mentioned it was Trep Parish’s birthday. She’s been gone close to three years, and it was at her memorial service I shared the many times she came to me wanting to scholarship a kid to go to camp. Don Brown used to do the same thing and even more.

So as I read this scripture this morning…I’m reminded that we should never get caught up in what others are or are not doing…We should be caught up with what we are doing…And whatever we may be doing, we keep it to ourselves, blow no trumpets, thump no chests…And continue to work humbly, as instructed by the scriptures, and follow the pattern of those—like Trep & Don—who have gone before us. 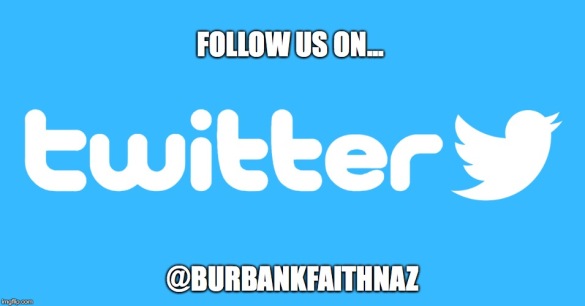 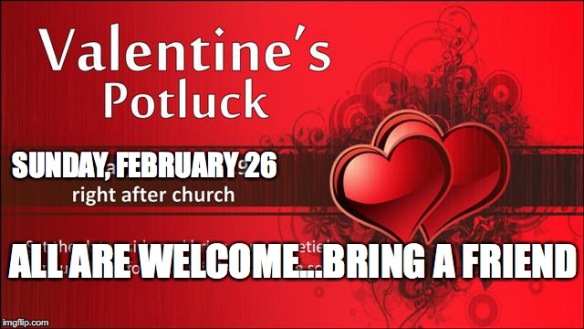 YOU ARE LOVED SUNDAY, February 26—THIS SUNDAY!
…One of the things we do really well at Burbank Faith is the Potluck…Our potlucks are so good that YELP wants to list us in its “Best Places To Eat in Burbank” file…So mark your calendar…connect with us here…at church…sign up…but be sure to join us for our after-church potluck following the worship service on February 26.

…Oh, and bring a friend.

Eric Canto has posted a digital recording of Sunday’s service on the church’s Facebook page.
The music is great…the speaker…might be a little hard on the eyes.
***

Roxi Clark is having some major dental work done this Friday and will be spending the night at St. Joseph’s. Please keep her in prayer.

Burbank basketball host’s Rancho Mirage Friday night at The Dawg House (Burbank High School). The winner advances to the CIF Finals. Tip Off is at 7:PM

Join us on March 15, for “Big Wednesday”

BIG WEDNESDAY—March 15…We are planning on having an All-Church dinner/Bible Study in Martin Hall…If you were around in the old days we used to call these “Dime-A-Dips” and we talked about missions…Dinner will start at 6:30 and then Larry Marak will share a Bible Study…We will have childcare available—Megan Torosian & Emmy Chavez have already volunteered…As of right now we are not intending for this to be a potluck…we will be asking people to sign up…if we reach a certain threshold we may rethink that…We will not being doing pizza…This will not be a weekly thing…but perhaps a couple of times a year…You have six weeks, check your calendar and be a part. 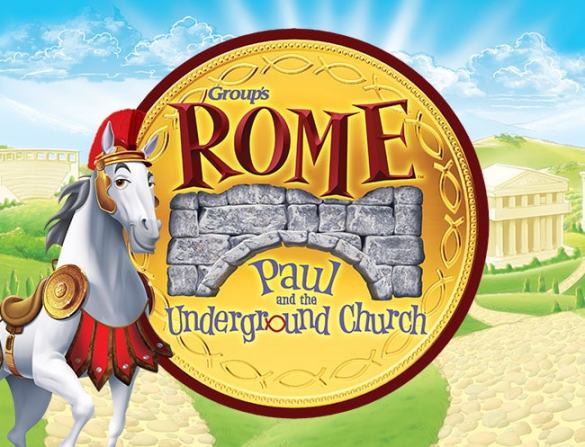 Did You Know?
On This Date…
…In 155 A.D., the martyrdom of Polycarp takes place. An early Church Father Polycarp was a disciple of the Apostle John. Arrested at age 86, Polycarp was burned at the stake for refusing to deny the Christian faith.

…In 1775, Anglican hymnwriter John Newton wrote in a letter: “How great and honorable is the privilege of a true believer! That he has neither wisdom nor strength in himself is no disadvantage, for he is connected with infinite wisdom and almighty power.”

… In 1834, Scottish clergyman Robert Murray McCheyne wrote in his journal: “Rose early to seek God and found Him whom my soul loveth. Who would not rise early to meet such company?”

…On this day in 1945, the U.S. flag was raised on Mount Suribachi during the battle for Iwo Jima. Struggle for the island began on February 19 and wouldn’t conclude until March 26. The total number of U.S. casualties was 19,217 wounded of which 6,821 were killed. High estimates have the Japanese numbers defending Iwo Jima at 21,060…When it was over, only 216 Japanese soldiers were captured and taken as prisoners.